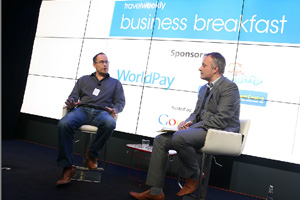 Flight, hotel and car hire comparison website Skyscanner is targeting major growth in the Asia Pacific market as it looks to expand its business outside its European stronghold.

Chief executive Gareth Williams told the latest Travel Weekly Business Breakfast run by Travolution’s sister title that the firm had taken on 200 new employees in the past 12 months including specialists in markets served by international offices in Singapore, Beijing, Barcelona and Miami.

But he insisted global expansion would not be pursued at the risk of the company’s existing strategy and said he was determined to build a strong British and European company following investment from US venture capital firm Sequoia Capital.

Speaking at the event at Google’s London headquarters, he said: “From a historical perspective we have more traction in Europe but from a company focus point of view, we are also looking at the growth potential in Asia Pacific in particular.

“Asia Pacific will represent more users and revenue than Europe in a finite period as it’s a much bigger market.”

He added: “We have never bet the company on internationalisation yet the UK now represents just under 20% of business. Everything we do is underpinned by our convictions – the convictions could be wrong but they are not all being bet on at the same time.

“It is as risky a time as any but we want to be able to have a positive impact on 100 times more people in the future and that involves some risk.”

Referring to investment from Sequoia Capital last year which valued Skyscanner at $800 million, Williams said: “It was a nice validation and our ability to raise funds in the future is enhanced by having Sequoia onboard.”

But he insisted: “If Europe is to succeed in the internet economy and not just as a market for internet sector companies then it needs strong brands. There are some good companies but there need to be more of them.

“We are going for (building the company) times ten or times a hundred from where are now, we are not in the market for a US parent.”