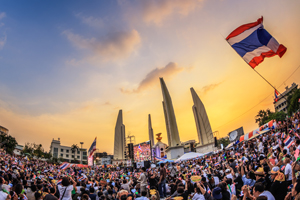 Anti-government protests in Bangkok continued on Tuesday morning, with reports of a police officer killed at a site in the centre of the city.

The news follows a statement from the Thai government that it intends to reclaim all official sites which have been occupied during the protests which began in November.

The BBC reported that around 100 protesters were arrested earlier on Tuesday outside a ministry building.

Violence then erupted, with one police officer shot dead.

Although the majority of Thailand and its capital remains safe to visit, the FCO continues to advise visitors to Bangkok to “take extra care and avoid all protests, political gatherings, demonstrations and marches”.