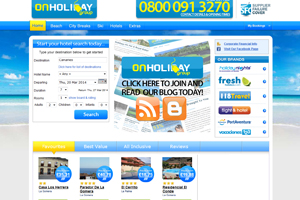 Bed bank and online retailer On Holiday Group has entered administration with forward bookings worth £19 million.

Discussions with another bed bank to take on On Holiday Group’s bookings broke down last night and staff were due to be informed this morning that the business was to close.

Steve Endacott, founder of the On Holiday Group, said the hoped-for deal with another bed bank “would have minimised disruption to customers and On Holiday Group’s travel agency partners”.

But he added: “However, we are saddened to report that only one bed bank was willing to complete a deal to help their travel agency partners.

“Unfortunately, the deal floundered last night because of deliberate and inaccurate leaks to the Spanish press along with legal complexities relating to the client account.”

The collapse of On Holiday Group is expected to leave its creditors, primarily overseas hotels, with unpaid debts of at least £7 million.

Endacott said monies received from agents were being held in ring-fenced client accounts and would be returned in the next few days.

However, clients will have to pay their bills in-resort and claim refunds from agents.

“I am absolutely gutted and deeply sorry to have to have to tell 65 people that they will lose their jobs, unless the administrator can find a buyer willing to take them on in the next few weeks,” said Endacott.

One of the pioneering dynamic packaging specialists of the last decade, On Holiday Group was set up in 2003 by Endacott, previously Airtours commercial director and MyTravel tour operations managing director.

The company was a member of the Midcounties Co-operative consortium and operated under its Atol licence, and these websites continue to trade.