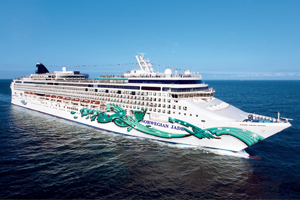 Calls to Tunisia have been cancelled by Norwegian Cruise Line after two Israeli passengers on Norwegian Jade were refused entry to the North African country.

Only two more sailings were scheduled to stop at the port of La Goulette in Tunis this winter season.

The itinerary will now include Palma instead and Tunisia will be replaced next winter by a sea day.

Norwegian chief executive Kevin Sheehan said: “We want to send a strong message to Tunisia and ports around the world that we will not tolerate such random acts of discrimination against our guests.

“We are outraged by this act and the fact that we were not notified in advance of this practice. We apologise sincerely to our guests who were affected and want them to know that we have taken the appropriate action in response.”

Norwegian said that the line employs workers of more than 90 different nationalities and welcomes everyone on its ships.

“The company does not condone or tolerate discrimination of any type and with these cancellations hopes to send a message to those who do that such acts are completely unacceptable,” a statement said.

An official at Tunisia’s tourism ministry told the AFP news agency that the visitors were prevented from disembarking because they did not have visas.