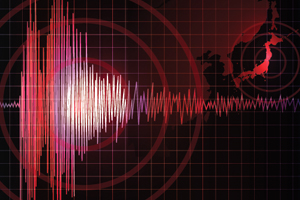 At least 17 people were reported as being injured as 6.3-magnitude earthquake struck off southern Japan early today.

There was no tsunami warning or reports of major damage but residents were urged to be alert to the danger of landslides following the tremor.

The epicentre of the quake was located eight miles north of the city of Kunisaki, the US Geological Survey said. The quake hit at a depth of 50 miles.

Japan’s Meteorological Agency said there was no risk of a tsunami but urged people to stay on alert.

The quake, which the Japanese agency measured as having a preliminary magnitude of 6.2, registered a strong intensity in parts of southwestern Shikoku, the main island of Honshu and southern Kyushu islands.

More than 18,000 people died when a 9.0-magnitude undersea earthquake sent a massive tsunami into Japan’s northeast coast in March 2011.