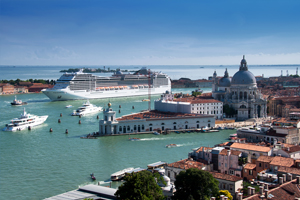 Large cruise ships could be allowed back into the lagoon in Venice.

A regional tribunal has reportedly overturned a law introduced last November which reduced the number of vessels of more than 40,000 tons permitted to enter from the Adriatic and sail to the city’s cruise terminal from next year.

The Italian government previously decreed that big ships should be banned because of the environmental damage they do to the World Heritage-listed city.

More stringent rules, which would have banned ships of more than 96,000 tons, were to have been introduced in 2015.

Lines have responded by planning to deploy smaller vessels on Venice itineraries.

But the law has been suspended by a regional court in the Veneto region, which ruled that alternative routes for ships to reach the terminal have not yet been agreed and that the risks posed by the vessels had not been proven, The Telegraph reported.

The suspension will last until June, when the issue will be discussed again.

The decision would be a victory for the cruise industry, which has dismissed concerns that ships cause damage to Venice’s delicate foundations.

Environment minister Gian Luca Galletti said that while the tribunal’s ruling would be respected, there was an urgent need to find a solution which would prevent giant cruise ships from “continuing to pass along Venice’s ancient canals”.

Dario Franceschini, the culture and tourism minister, said it was “unimaginable that such giants should be allowed to pass right in front of St Mark’s Square. Nobody with an ounce of common sense can understand it.”

A Clia spokesman said: “The cruise industry is following the case very closely.  We are very attentive to this issue and we look forward to a final judgment when it becomes firm on June 12.

“Clia wants to highlight, once again, how important Venice and the Venice Cruise Terminal are for the entire cruise industry.

“The cruise industry seeks regulatory certainty and wishes to work with all stakeholders to deliver a long-term solution that safeguards the sustainability of Venice and its cultural and environmental heritage.”