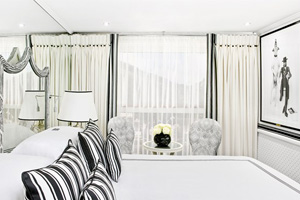 Uniworld has launched its new ‘Super Ship’ after the vessel was christened by French actress Catherine Deneuve.

The ceremony for the 80-stateroom SS Catherine, which saw the ceremonial breaking of a bottle of Dom Perignon across the bow, was held in Lyon, France, and attended by 150 industry guests.

The actress, star of films such as Belle du Jour and Indochine, serves as godmother for the river cruise ship.

Like sister ships Antoinette and River Beatrice, the Catherine has been designed by Beatrice Tollman, president and founder of Uniworld’s sister company The Red Carnation Hotel Collection; her daughter Toni Tollman; and Brian Brennan, projects director.

The ship has 30 cabins, five suites and one Royal Presidential Suite. It features signature Bar du Leopard, and has cinema facilities, a swimming pool, fitness centre and the Serenity River Spa.

Guy Young, president of Uniworld, said: “I am confident that the S.S Catherine will continue setting the standard of excellence in luxury river cruising. She will allow us to offer more capacity to support of popular Burgundy and Provence and Grand France itineraries.”

Los Angeles-based Uniworld offers more than 500 departures sailing on more than 15 rivers in over 20 countries throughout Europe, Russia, Egypt, China, Vietnam and Cambodia.

The fleet has an average capacity of 130 guests and shore excursions are included in the price of the sailing.

Catherine will sail on a seven-night Burgundy and Provence itinerary and a 14-night Grand France sailing on the Seine.