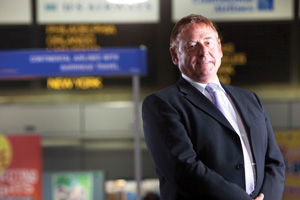 Barrhead Travel chairman Bill Munro (pictured) has told staff that an independent Scotland would be a “complete disaster” and attacked the “lies” being put out by the SNP.

In a leaked email to all staff and directors of the business, Munro warned of “impending disaster should there be a yes vote”.

He asked staff to read an attached report by banking expert Robert Lyddon which was critical of the implications of Scottish independence on businesses.

The email has prompted outrage on social media, with some posts on the agency’s Facebook page calling for a boycott of the travel firm while others were supportive of Munro’s right to speak out.

A message was posted on the page last night which said: “Whilst we respect Mr Munro’s views, we would like to clarify that this is not the opinion of the company. We believe that it’s for the people of Scotland to decide on the country’s future when they go to the polls in September.”

Munro’s original email said: “I have been asked by many of my staff what my views of the referendum are. For Barrhead Travel and most, if not all travel companies, it would be a complete disaster, especially with branches in England and Ireland.

“37% of our business comes from England and we would not be able to trade outwith Scotland due to Scotland being outwith the EU and English regulations for at least three years.”

It went on to say: “As the weeks pass and more is discovered, the magnitude of the impending disaster should there by a yes vote becomes ever more apparent.”

Munro later defended his decision to send the memo in the Scottish media, saying the views expressed in the email were his own and not that of the company.

He said: “I decided to share my personal opinion which is that independence would not be good for Scotland, its businesses or its consumers.

“One of my main concerns is that of the financial protection of the Scottish travelling public which would be under threat in an independent Scotland. Second to that is the uncertainty of cross-border trading which I believe will be impacted negatively, a concern especially for businesses with interests outside of Scotland.

“The opinions expressed are my own and not those of the company. Just as I have the right to express my own opinion, I respect that is true of everyone in Scotland, including the 800 employees of Barrhead Travel who will make their own views clear throughout the democratic process.”