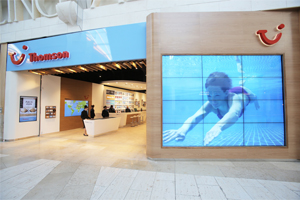 Thomson is to open a fourth next-generation store in Gateshead this summer.

The new shop, located in the city’s Metrocentre, will be its largest concept store and its flagship UK outlet. Thomson’s existing next generation stores, which boast new concepts such as giant window screens and interactive maps, are in Bluewater Shopping Centre (pictured), Liverpool and Bristol.

Set to open this summer, the Gateshead store will replace Thomson’s two existing travel agencies in the shopping centre and be at least 20% bigger than the Bluewater agency. Staff from the two shops are expected to relocate to the new store.

He added: “It’s given us real confidence that by combining the right technology, inspirational formats and the right people we can fight off the competition and grow with these new shops.”

Burling said sales in the new Bluewater store were already exceeding the combined total of the two previous Thomson stores in the Dartford shopping centre, which he suggested meant the company was taking market share from its competitors.

Burling said the company would continue to look for new sites for further next-generation stores, adding: “We are constantly looking; it’s very opportunistic. We are very encouraged by the success of the ones we have done so far.”