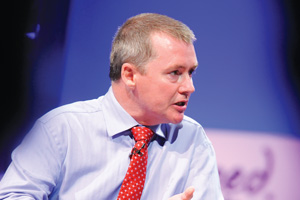 Willie Walsh, head of British Airways’ parent company IAG, has hit out at a suggestion that carriers flying the Atlantic are making money “hand over fist” yesterday.

Walsh was speaking at the Capa (Centre for Aviation) Airlines in Transition conference outside Dublin.

European Commission director of air, aviation and international transport policy Matthew Baldwin told the conference: “There is evidence people are making money hand over fist on long-haul, particularly over the Atlantic.”

Walsh hit back saying: “That is nonsense.” He told the EC director: “That is typical of a bureaucrat. You are so out of touch.”

The IAG chief executive insisted: “This is not a hugely profitable industry. The airline industry has never covered its cost of capital. It operates on tiny margins and faces massive costs of investment.

“We do not make sufficient profits. The level of profits is nowhere near enough.”

Irish Aviation Authority chief executive Eamonn Brennan said: “European open skies helped airline profitability. But a lot of airlines exist on cash-flow and live hand to mouth, and when cash runs out they are propped up by governments.”

However, Brennan added: “There are people in the industry making money. The industry is not devoid of profit. I went to a suppliers’ conference and felt sorry for any idiot running an airline.”

Walsh also clashed with European Aviation Club chairman Rigas Doganis who criticised the IAG boss for complaining about the extent of regulation in the aviation industry.

“Things have changed dramatically. EasyJet and Ryanair have established bases all over Europe. The problem is that legacy carriers in Europe have stuck their heads in the sand. BA, Air France, Lufthansa have decided to stay in their hubs.”

Walsh told Doganis: “You should identify yourself as a director of easyJet when you say that.”

He added: “I’ve no issue with what has happened in Europe. But the regulations across the Atlantic and globally are restrictive and getting more restrictive.”