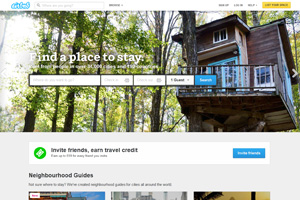 Home-rental site Airbnb is looking to expand to help users buy and pay for everything from event tickets to travel.

The company’s valuation of $10 billion has quadrupled in two years as it brought to life the so-called sharing economy, the linking up of individuals who want to temporarily lend what they own to others willing to pay for it.

Airbnb co-founder and chief technical officer Nate Blecharczyk told the Financial Times that the company was looking beyond its roots.

The focus is figuring out how to use the service to sell other products to its millions of users in nearly 200 countries.

“Bottom line, it could eventually be anything, whether you want to book a dinner reservation or plane tickets or whatever we can take your money . . . and we can route it appropriately,” he said. “It’s definitely something we’re actively working on.”

Ultimately it wanted to offer those who used its service to rent strangers’ homes or flats “the convenience that you might expect of a hotel”.

Behind the company’s move towards more standard travel services is the e-commerce platform that the site runs on. It can handle nearly 70 currencies – far more than most e-commerce sites – and has credit card or bank information for all of its users, the FT reported.

The move into value-added services also comes as the company fights legal challenges from cities who argue the company should be taxed like traditional hotels.

While the company had not yet settled on how it would expand its offering, ultimately the expansion itself would help the company decide where to go next, Blecharczyk said,

“The more stuff that we handle, the more data we’re able to collect about what it is that you are in the market for,” he said.