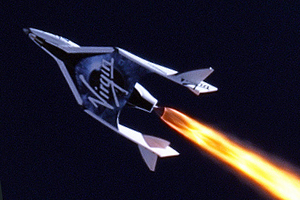 A deal with the US Federal Aviation Authority has been agreed to allow Virgin Galactic to charter space flights from its base in the US state of New Mexico.

The agreement lays out rules for how the flights will be integrated into US air space, the BBC reported.

Virgin Galactic said the deal brings it “another step closer” to commercial space flights which Virgin founder Sir Richard Branson hopes to launch by the end of the year.

The agreement with US authorities outlines how the FAA’s air traffic control centre in Albuquerque, New Mexico, and the state’s Spaceport Authority, will work with Virgin Galactic to make sure there is safe airspace for Virgin Galactic’s space plane, the SpaceShipTwo.

Virgin Galactic, which is co-owned by Sir Richard and Abu Dhabi’s Aabar Investments, also has agreements with the US state of California to allow test flights.

Separately, the FAA found that Virgin Galactic rival SpaceX’s plans to build a spaceport in Texas would not have adverse consequences on the environment.

SpaceX has proposed launching 12 rockets a year from a site near Brownsville in southern Texas.

US regulators found that while the proposed site would create noise for residents of a nearby neighbourhood and alter the landscape, most other environmental impacts could be mitigated.

The firm, which was founded by entrepreneur Elon Musk, is set to unveil the latest model of its Dragon ship, which is designed to ferry NASA astronauts to and from the International Space Station.