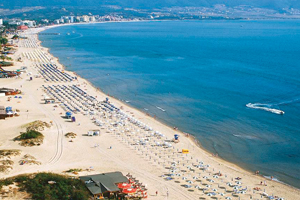 A holidaymaker is reported to be in intensive care after being attacked at a Bulgarian beach resort.

Adam Prosser, 27, of Fforestfach, Swansea, had been out for a meal with his girlfriend Kayley Harrison when she said he was set upon by a group of men in Sunny Beach.

He had to fly home for treatment after doctors in Bulgaria refused to treat him without a health insurance card, the BBC reported.

He suffered swelling and bleeding on the brain and fractures to his skull. Harrison, 19, claims she was also attacked as she tried to help her boyfriend.

Prosser was treated at the scene by a nurse before being taken to hospital with suspected brain damage. But paramedics refused to treat him so the couple made the 2,000 mile journey back home.

A check-up at Swansea’s Morriston Hospital revealed the serious head injury and he has been referred to specialists in Cardiff.

Harrison said Prosser was now in a stable condition but the attack had put the couple off going abroad “for life”.