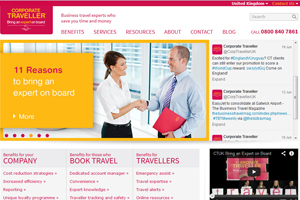 The expansion meets demand for additional space after the company hired eight new operational teams and increased annual turnover by £35 million to reach £200 million over the last 12 months.

Plans are in place to open a sixth London office within the next 18 months as the company continues with a target of £240 million turnover by June 2015.

Growth has also been driven by a surge in new business in the past year as Corporate Traveller has won an average 70 new UK clients a month which are trading at £48 million.

The bulk of the new clients have been gained after Corporate Traveller recruited 27 additional business development managers, boosting its UK sales team to a total 65 BDMs.

Based close to Waterloo, the new flagship office in London has opened with 25 consultants but has capacity for a total 60 staff.

The TMC already has premises in the capital in Clerkenwell, Farringdon, Vauxhall and Wimbledon. The addition of Waterloo brings the total number of consultants to 245 across 18 locations nationwide.

UK general manager Graeme Milne said: “Our staffing model whereby a number of small operational teams are based together in one location providing expert personal travel services to SMEs locally has been is one of the secrets of our success.

“Each team is made up of a maximum six consultants. Rather than expand a team as new business comes in, we set up a new team.

“The amount of new business we have won over the last year, particularly in London and the southeast, meant that we had run out of operational space in our existing offices, hence our expansion into substantial new premises at Waterloo.

“We have also introduced a process whereby each BDM works alongside the relevant consultant for 12 months after they win a new client to ensure implementation and client servicing are of the highest standards, and that the client begins trading with us immediately.”