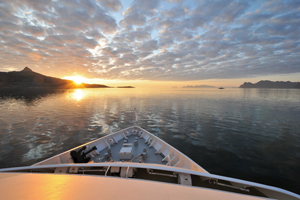 Silversea Cruises is looking at the possibility of adding a new-build to its classic fleet.

Speaking at the line’s 20th anniversary gala in London on Monday, the line’s chief executive Enzo Visone said no contract had been signed but he was looking at expanding.

“I will not hide the fact that we are planning and studying for a new-build.

“It’s too early to announce, we are still a long way off from signing a contract but we do have plans for a new ship which would join the fleet in the next three years.

“To build a new ship takes a lot of planning and time to complete the process so it isn’t something that would join the fleet imminently.  It’s on the drawing board, it’s a project at the moment and it’s very early.”

Visone said he was also hoping to expand the expedition side of the line which began in 2008 with the acquisition of Silver Explorer (pictured) and expanded with Silver Galapagos and most recently Silver Discoverer earlier this year.

He said the line’s partnership with the Royal Geographical Society – which sponsors the itineraries – made its proposition unique, with a team of 12 experts on board each sailing.

The line was celebrating its 20th anniversary on its original ship Silver Cloud, which was docked alongside HMS Belfast. The event also marked the 60th anniversary of Relais & Chateaux, which has partnered with Silversea for the past 15 years.