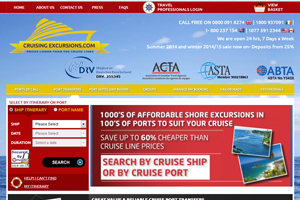 Cruising Excursions has announced a change in shareholders, of directors and the appointment of former Tui Specialist and Activity managing director John Wimbleton as chairman.

Cruising Excursions, which is widely credited for revolutionising the way cruise excursions are sold in the UK, has meanwhile promoted general manager Simonne Fairbanks, who has been with the business since start-up in 2011, to chief operating officer and appointed her to the board of directors, which also includes Wimbleton and Knight.

It is understood the board is also looking for a chief executive officer from outside the industry.

New Cruising Excursions chairman Wimbleton was at First Choice then Tui for 22 years and currently holds various industry positions including as chairman of Scott Dunn and as non-executive director of European Travel Ventures and as a travel industry advisor for Catalyst Corporate Finance.

He said: “I’ve watched and been impressed by cruisingexcursions’ rapid growth over the years – it launched with 240 excursions at 60 Med ports and now has around 10,000 excursions at more than 700 ports worldwide.

“I believe this company will continue to go from strength to strength – virtually every month it has exceeded its targets.”

He said building the company’s direct business would be one of his focuses.

“The trade has embraced the concept of pre-selling cruising excursions but there is a huge untapped consumer market out there and I look forward to directing investment in addressing this area in the next stage of growth.”

Photi said: “John Wimbleton is a travel industry professional with over 35 years experience in tour operating and distribution at board level, with extensive international experience.

“He has the exact credentials to lead cruisingexcursions.com in the next stage of growth, which includes expansion in the European and International markets.”

Cruising Excursions is currently on sale with 99% of the travel trade, including Tui, Global Travel Group, Thomas Cook and Advantage and accounts for 50% of the company’s overall sales.

Agents receive up to 16% commission with the average agent sale being around £280 thanks to multi package products. The company has recently expanded into Europe and the website is available in French, German and Dutch versions. There is representation in the USA and is expanding rapidly in Australia thanks to a deal with the appointed GSA Harvey World Travel.