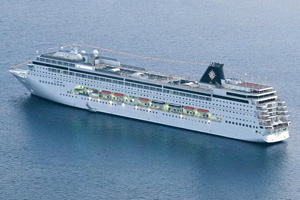 MSC Cruises claims its investment in stretching four ships shows the line’s commitment to raising standards on board and making its ships more competitive in the marketplace.

Over the past six days, MSC Armonia (pictured) has been in dry dock at the Fincantieri shipyard in Palermo, Sicily. The ship has been cut in two, a process which has taken several days, and today the two halves were gradually separated.

The project is part of the line’s €200 million Renaissance Programme which will add more cabins and enhance facilities on Armonia, MSC Sinfonia, MSC Opera and MSC Lirica.

The work on board will be finished by November 17 when the ship will be handed back to MSC Cruises.

When complete, the ship will be able to cater for 2,679 guests, having previously carried 2,199.

Emilio La Scala, general manager for they cruise line’s technical department, said the “complex project” would allow the slightly older ships in the fleet to compete alongside newer vessels.

La Scala said: “Our programme cost a lot of money and in the next two years we will extend our capacity. It’s a huge investment that shows our commitment to having high standards and using cutting edge technology.”

The new block being added to the centre of the ship, which was also build in Palermo, is just short of 24 metres long ,and the renovation will result in the addition of 193 cabins, new dining options, and a new aqua park complete with water cannons and buckets. Children’s facilities are also being brought in line with the rest of the fleet.

The ship will have new areas for the baby club, built in partnership with Chicco, a new mini club, and revamped areas for the young club, junior club and teen club.

New dining experiences include the buffet’s hours being extended to 20 hours a day, a new lounge and an extended main dining room. A library is also being added and the Aurea Spa will have a revamp.

The ship will return to service on November 17 with a Mediterranean cruise from Genoa to the Canary Islands.

Hydraulics and 22 ‘skid shoes’ helped to separate the two parts, a process which takes around eight hours to complete.

The next part of the project will be to unite the three pieces before they are welded into place, after which the central area is refitted with new wiring and interiors.