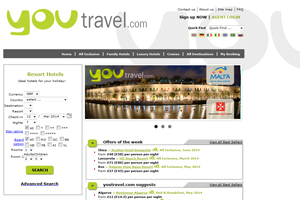 Trade bed bank Youtravel has announced a restructuring that will see its purchasing and products departments centralised with parent company Meeting Point in Dubai.

As part of the changes chief marketing officer Andy Baker, who was based in the London office, is to leave the company he joined 14 months ago from MedHotels.

In a memo to its partners Youtravel said it was planning to further invest in the UK team as well as its distribution department as it seeks to expand here and overseas.

It added it was also committed to investing in technology with a new platform being developed “that will enable us to become market leaders and innovate new ways of supplying a first class service to our customers”.

German tour operator FTI Group, the parent company of destination management company Meeting Point, took an 85% stake in Youtravel in 2012.In the letter Youtravel stated: “We are looking at expanding in to international markets and improve our business offering and existing product portfolio.

“Over recent months we have been focussed on how we can achieve these goals and have taken the decision to centralise our purchasing and product departments in Dubai from 1 November.

“We realised that by more closely aligning ourselves with sister company, Meeting Point, and having a centralised function we can offer a better service and expand our business internationally.

With this strategic restructure we will be in a better position to offer new products, including long-haul destinations; Indian, Sri Lanka, Mauritius, Maldives, Australia and European Cities, such as; Barcelona, Madrid, Amsterdam, Vienna, Munich, and Berlin as well as many others.

“We also expect to increase the products that we offer in our existing destinations and provide additional exclusive hotels.”

Product and purchasing departments will continue to remain under the responsibility of chief operating officer Ranj Kund.

The memo added: “We are taking some really positive steps forward and are excited about the future of Youtravel. We ensure that we will keep you all updated with our progress and plans over the comings months.”

On Baker’s departure it said: “He had a pivotal role in the development of Youtravel and the conceptualisation of the new structure. It is disappointing that Andy is unable to continue on the journey with us, but we wish him every success in his future endeavours.”

Baker said “It’s a great move for the company as it will allow them to work much closer with Meeting Point and also to be able to compete with other suppliers who are still acting as agents.”