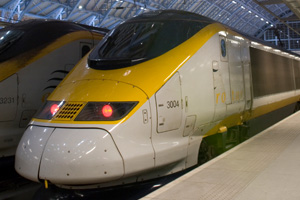 A total of £18.6 million was paid by Eurostar in dividends last year to its British, French and Belgian state owners as the Channel tunnel high-speed passenger service carried more than 10 million passengers for the first time.

The payout was 14% up on a year earlier, handing the UK government £7.4 million from its 40% stake, which it is trying to sell as part of a mass privatisation of state-held assets, according to the Sunday Times.

Investment bank UBS – which worked on the Royal Mail privatisation – has been appointed to sell the Eurostar stake in a deal that could fetch about £300 million.

Plans for a service between London and Amsterdam are expected to start from December 2016.

The company has also ordered new intercity express trains from Siemens, some of which will come into service next year.

Eurostar plans to unveil the first of its 10 new trains in London in November, part of a £700 million investment in rolling stock. It is also bidding, together with France’s Keolis, to run the UK East Coast mainline route.

The French state-owned train company SNCF owns 55% of Eurostar and Belgium’s SNCB has 5%.