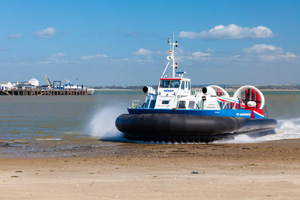 A hovercraft pilot who transported passengers across the Solent while nearly three times the legal alcohol limit has been jailed for eight months.

A colleague had to take the controls when Richard Pease collapsed after missing the landing pad at Ryde on the Isle of Wight on June 22, the BBC reported.

The Hovertravel craft was carrying 36 passengers at the time. It had previously taken 95 passengers to Southsea in Hampshire.

Pease, 50, of Northwood on the island, pleaded guilty at a previous hearing.

Newport Crown Court heard a colleague on the Freedom 90 craft noticed Pease’s reaction time was slow during the crossing and that he failed to carry out a manoeuvre properly when the hovercraft came across a tanker.

When Pease was asked if he was OK following the failed landing, the court heard he gave no positive response, his head dropped and his body went limp in the chair.

A colleague had to take the controls, releasing air, and making the craft safe. Another pilot then boarded to land it safely.

When Pease was breath tested, some six hours later, he was nearly three times the legal limit.

Pease, one of Hovertravel’s most experienced pilots, admitted a charge of being master of a hovercraft having consumed excess alcohol.

Sentencing Pease, who admitted to having a past dependency on alcohol, Judge Susan Evans QC said: “It’s tragic that someone of your standing and with such an impressive past career should have destroyed all of that in one day.

“It was an appalling breach of your duty.

“Your actions could have resulted in tragedy but fortunately they did not.”