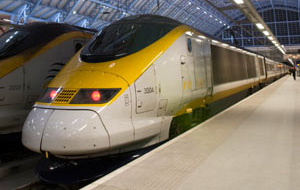 Eurostar today unveiled details of its planned new service to Amsterdam after recording a 3% rise in passengers to 2.8 million in the third quarter of the year.

Sales revenues for the three months to September 30 rose by 2% to £211 million.

The number of passengers using Eurostar’s Business Premier class rose by 6% compared with the third quarter of last year.

The direct service from London to Amsterdam from 2016 will call at  Antwerp, Rotterdam and Schiphol airport.

“The arrival of a direct high speed rail service will provide passengers with an attractive, convenient alternative to the airlines,” Eurostar said.

Prior to this, tickets go on sale in December for a new all year-round service direct from London to Provence stopping at Lyon, Avignon and Marseille from May 2015.

A new Eurostar e320 train is to be unveiled at St Pancras on  November 13 – a year before the trains are due to enter commercial service and on the eve of the 20th anniversary of the service.

The 900-passenger Eurostar e320 trains will boost capacity per train by 20% and be capable of a speed of 200 miles per hour.

Chief executive Nicolas Petrovic said: “After 20 years of leading the way in cross channel high speed rail travel our sights are now set on expanding further afield and making rail the obvious choice for short haul travel.  With passenger numbers and sales revenues increasing year-on-year we are well placed for the next phase of growth.

“Our new direct services to Provence and Amsterdam will revolutionise travel to these destinations and mark the start of a new chapter for our business.”

He added: “Over the next two years our customers will see a complete transformation of our service as we upgrade and enhance every stage of the passenger journey.

“By making a substantial  investment  in our fleet, we are sending a strong signal about the ambition for the business and our commitment to delivering an exceptional experience for our passengers.”

Eurostar is also making “significant investment” in its stations, service and digital channels.

“The stylish new ticket offices at St Pancras, the upgrading of business lounges  and the extensive refurbishment of both Lille and Paris Nord stations underpin the transformation of Eurostar’s services as the business enhances its offering and expands its reach into Europe,” the company said.