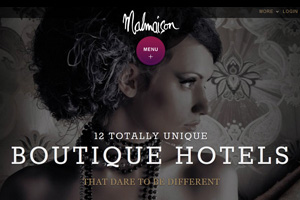 Malmaison has defended its self against criticism that images surrounding building work at its Manchester hotel are “demeaning” to women.

Kate Lloyd, from the Construction Industry Training Board, condemned the hoarding as “depressing and highly insulting”.

She said the images on the hoarding “only serve to set us back”.

“The CITB has for years been challenging stereotypes around women in the industry and trying to encourage females of all ages to consider careers in the sector.”

Images on hoardings at Manchester’s Malmaison hotel are condemned as “sexist” http://t.co/QzCVdnMkzIpic.twitter.com/GpNOiB3FIN

It followed criticism from writer Jeanette Winterson, who compared pictures of a model holding tools to those of “soft-porn babes,” the BBC reported.

Winterson, also a professor of creative writing at Manchester University, wrote in the Guardian about her “outrage” at seeing the ‘Mal at Work’ hoarding, when staying at the city centre hotel last week.

A spokesman for the hotel chain said it was “meant to be a bit of fun with both men and women depicted to highlight our construction”.

“No offence was meant and we apologise if it’s been taken the wrong way,” he said.

“It’s made a lot of people smile and not too many frown.”