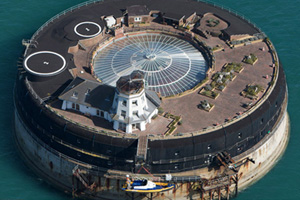 A hotel being built inside a sea fort in the Solent will not open until spring 2015 due to building delays.

No Man’s Fort, one of three 19th century sea forts owned by property firm Clarenco, had been due to open last Friday.

The company said issues with construction of the landing stage meant it was not able to move furniture into the hotel.

A new date for the opening has yet to be set, the BBC reported.

No Man’s Fort, part of the company’s AmaZing Venues division, is about 1.5 miles off the Isle of Wight and is the second sea fort in the Solent to be brought back into use by Clarenco.

It will have 22 bedrooms and a dining room that can seat up to 200 people when complete.

The private island will also be equipped with a private helipad, spa, games rooms, wine tasting rooms, nightclub and a rooftop hotpool.

The company also owns Spitbank Fort, which opened as a private venue in 2011.

It also owns a third fort, Horse Sand, which it plans to open as a museum, although work there is yet to begin.

A company spokeswoman said: “The process to restore historic buildings needs to be undertaken with meticulous care and love.

“After several lengthy consultations with the external agencies helping us with the extensive refurbishment, we unfortunately need to postpone the opening of No Man’s Fort until spring 2015.

“However, the delay will mean we have the opportunity to get things spot-on which really matters to us and we hope guests will agree.

“The forts are such an important part of British history… we really want to get things right.”

The Solent forts were built in the latter half of the 19th Century to protect Portsmouth from the threat of invasion.