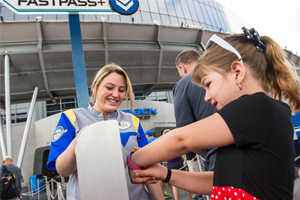 Fourth-quarter revenues at Walt Disney Company’s theme parks and resorts have risen by 7% to $4 billion, with operating profit up 20% to $687 million.

The operating income growth in the peak summer three months to the end of September was due to an increase at US domestic parks, partially offset by a decrease in international operations, the company said.

The parks and resorts division saw revenues for the year to September rise by 7% to more than $15 billion with operating income up 20% to $2.6 billion.

Annual growth in the parks and resorts division was due to higher average guest spending, attendance and occupancy at US parks, partially offset by higher costs driven by the continued rollout of the MyMagic+ automated reservations and admissions system (pictured).

The increase in guest spending in the fourth quarter was mainly due to higher average ticket prices for theme park admissions and for sailings with Disney Cruise Line and increased spending on food, drink and merchandise, the company said.

The decline in international operations in the summer quarter was due to a lower operating performance at Disneyland Paris, higher pre-opening expenses at Shanghai Disney Resort and the impact of a weaker yen on our royalties from Tokyo Disney Resort.

Walt Disney Company chairman and chief executive, Robert Iger, said: “Our results for fiscal 2014 were the highest in the company’s history, marking our fourth consecutive year of record performance.

“We’re obviously very pleased with this achievement and believe it reflects the extraordinary quality of our content and our unique ability to leverage success across the company to create significant value, as well as our focus on embracing and adapting to emerging consumer trends and technology.”