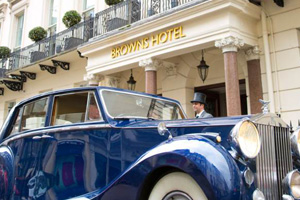 Sir Rocco Forte’s hotel group is returning to expansion after securing a £60 million equity injection from an Italian institution.

The hotelier wants to double the size of Rocco Forte Hotels over the next five years after the investment by Fondo Strategico Italiano, the Italian state-backed sovereign fund.

The fund is injecting the £60 million into the company in exchange for a 23% satke, valuing the enlarged equity at £260 million, The Times reported.

Sir Rocco, who founded Rocco Forte Hotels in 1996 with his sister Olga Polizzi after Granada’s takeover of the Forte hospitality empire, said that he was “already at an advanced stage of discussion concerning a development in Venice and actively pursuing projects in Milan, Naples and Sicily”.

The company plans to open a hotel in Jeddah next summer under a management contract and is close to signing a further contract for a new development in Shanghai.

Rocco Forte Hotels has ten hotels, including Brown’s in London, the Balmoral in Edinburgh and the Savoy in Florence.

Sir Rocco said that he was relieved to go “back on the attack” after a tough six years, during which the company was forced to sell hotels including The Lowry in Manchester and Le Richemond in Geneva to reduce its debt burden.

“When Lehman Brothers collapsed our sales dropped by 40%, it was frightening,” he told the newspaper. “Now I’m getting moving. I’m not somebody who likes to be on the defensive.”

Sir Rocco said that, with the exception of the Hotel Astoria, St Petersburg, the group was trading well, with sales up 8% in the year to date.

He said that some of the new projects and acquisitions would be financed by a new hotel investment fund that would then lease them to Rocco Forte Hotels.