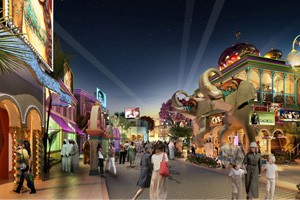 Dubai Parks & Resorts is looking to raise $689 million by selling 40% of its theme parks unit to investors in an initial public offering later this month.

The theme parks arm of real estate developer Meraas Holding is building a $2.7 billion entertainment complex that includes Legoland Dubai together with Hollywood and Bollywood-themed parks and a four-star hotel due for completion in 2016.

The company said it had already signed construction contracts worth $1.25 billion, covering just over half of the estimated cost of building the theme-park complex.

The development coincides with a push to broaden the mix of Dubai’s entertainment options to appeal more to families as the emirate tries to shed its image as an adult-oriented vacation playground, the Wall Street Journal reported.

Dubai is planning to attract 20 million tourist visitors by 2020, double its current level, with the Dubai Parks project forecast to attract 6.7 million visitors in its first full year of operations.