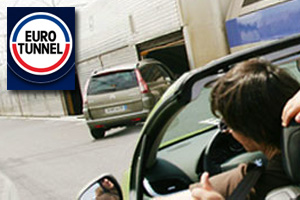 Tourists’ cars returning from France could be increasingly targeted by migrants who have traditionally tried to enter the UK in lorries, a senior figure at Eurotunnel has warned.

John Keefe, Eurotunnel’s public affairs director, said he feared the immigration crisis – which has seen hundreds of illegal immigrants gather in camps outside Calais – would intensify as queues develop in France in the run-up to Christmas.

He told the House of Commons’ home affairs select committee: “The crisis could potentially get even worse. As we approach winter, it could start to overlap on to the passenger market.”

As the Christmas holiday season approaches there would be longer queues of static traffic as people waited to board the Channel Tunnel shuttle trains, he said.

The seasonal traffic is partly driven by people travelling to the Continent on booze cruises but also on general shopping trips and to attend Christmas markets in France and other European countries.

Keefe said: “The slower the flows of traffic through the border, the more opportunity there is for migrants to jump on to vehicles.”

The warning came after reports that a suspected illegal immigrant managed to hide himself behind the front seat of a woman’s Fiat Panda in September to get into Britain, the Telegraph reported.

The Road Haulage Association’s international affairs head Peter Cullum and UK Chamber of Shipping’s head of taxation, ferry and cruise Tim Reardon also told MPs they regarded Calais as being in crisis due to the migrant problem.

Reardon said Calais was now regarded not as a port and a place to do business but as “a place where there is a problem with migrants”.

Keefe said migrants were living in “appalling conditions” in Calais, adding: “I have heard people say they are among the worst refugee camps in the world.”