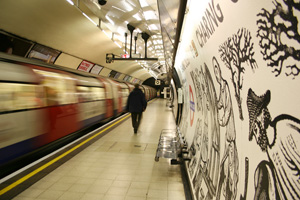 Charing Cross station in London was evacuated as emergency services dealt with a fire on a train on Sunday.

Around 100 people were rushed out of the station at around 10.50am as a precaution amid false rumours that a bomb had gone off.

Two people were checked by paramedics but no-one was injured.

British Transport Police said that the fire was thought to have been caused by an electrical fault and that there were no suspicious circumstances, the Press Association reported.

The station re-opened at about 1.15pm after about 35 firefighters and six fire engines from Soho, Euston and Lambeth attended the incident.

The train affected was the 10.55am South Eastern Trains service to Robertsbridge in Sussex.

Trains were diverted to Victoria or London Bridge. The Underground station at Charing Cross was closed for about 15 minutes before reopening, Transport for London said.