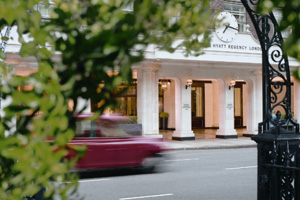 A suspected gas explosion at a five star hotel in London left at least 14 people injured.

The five-star Hyatt Regency London – The Churchill, in Portman Square, was evacuated following the blast shortly before midnight on Friday.

London Ambulance Service said five of the injured were taken to hospital, including two with leg wounds.

Another nine people who sustained injuries were treated at the scene.

London Fire Brigade said the explosion happened at about 11.40pm in the basement of the hotel, causing part of the building to collapse.

A hotel spokesman told the BBC that said that no guests were harmed, but that 12 staff were treated for injuries. Guests were accommodated in other hotels while the damage was being assessed.

About 80 firefighters were called to the scene, including appliances with specialist equipment to deal with collapsed buildings. London Fire Brigade said at the height of the incident about 500 people were evacuated. The hotel has more than 400 bedrooms.

The hotel spokesman said: “Hyatt’s top priority is the safety and well-being of our guests and associates, and we are currently working to provide guests with accommodations while we evaluate whether the hotel suffered any significant damage.”