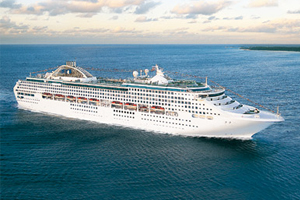 A search for an 84-year-old man believed to have gone overboard from a cruise ship east of Sydney has been called off.

The maritime safety authority said later there had been no sightings of the man and he was unlikely to have survived the 25m fall from the ship.

The Princess Cruises’ ship stayed in the area during the search rather than continuing to Sydney.

Australian Maritime Safety Authority spokesman Mal Larsen said the circumstances behind the incident were not yet clear.

He said the man was believed to have gone overboard at about 9pm local time on Monday about 175 miles east of Sydney.

The safety authority later said that CCTV footage showed the man falling from the ship, and that medical experts said he was very unlikely to have survived

Sun Princess had been sailing to Sydney after completing a 13-day New Zealand cruise.

The line said a thorough search of the ship was conducted but the passenger could not be found.