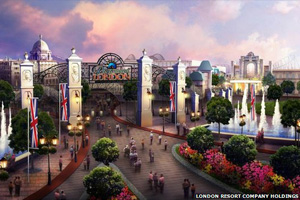 A £2 billion theme park in Kent will feature rides based on popular BBC shows such as Top Gear and Doctor Who.

The Paramount Pictures entertainment resort on the Swanscombe Peninsula, near Dartford, is due to open in 2020.

London Resort Company Holdings (LRCH) said it had signed a deal with BBC Worldwide that would let it feature famous BBC programmes and characters.

The theme park would also include Hollywood-inspired attractions.

LRCH director David Testa, said: “We are delighted to bring the world’s leading public service broadcaster on board this project.

“The BBC has played an instrumental role in shaping the British entertainment industry for nearly a century, creating some of the most iconic and cherished characters on TV and radio.

“It seems only right therefore that its programmes will be present at the new London Paramount Entertainment Resort, which will combine the glamour of Hollywood with the best of British culture.”

The park, on a 900-acre site is next to Ebbsfleet International railway station, is expected to create up 27,000 jobs.

Plans for the former cement works also include Hollywood-inspired rides, a water attraction, a 2,000-seat theatre and 5,000 hotel rooms.

BBC Worldwide live events director Stephen Davies said: “We’re always looking for opportunities to extend fans’ enjoyment of their favourite shows and the idea behind this resort is a really exciting way of celebrating the very special place the BBC has in British culture.”

It features rides based on the Postman Pat and In The Night Garden children’s shows.