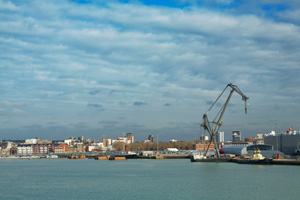 Cruise ships sailing to and from Southampton are not being affected by a giant car carrier which was run aground to prevent it from capsizing.

The 51,000 tonne Hoegh Osaka remains stranded on the Bramble Bank between Southampton and the Isle of Wight.

A 200-metre exclusion zone has been set up around the ship to prevent small vessels interfering with tugs and other shipping following the incident as the ship left the Hampshire port.

The 180-metre Singapore-registered ship carrying 1,400 cars is reported to be listing at 52 degrees. The salvage operation is expected to take days, possibly weeks.

The vessel developed a severe list shortly after it left port on Saturday night and the pilot and the master took the decision to save the vessel and its crew by grounding it on the bank, according to Ingar Skiaker, chief executive of Hoegh Autoliners which owns the vessel.

The Marine Accident Investigation Branch has sent a team to investigate.

A spokeswoman for the Maritime and Coastguard Agency said: “The car carrier Hoegh Osaka remains grounded on the Bramble Bank in the Solent. All crew members were evacuated from the vessel overnight by coastguard rescue helicopter and RNLI lifeboats.

“There is no impact on vessels transiting the Solent as the vessel is not within a shipping channel.”

Cunard’s former flagship Queen Elizabeth 2 with 1,700 passengers on board ran aground on Bramble Bank in November 2008 but was able to continue its journey on the rising tide after four tugs pulled it clear.

Bramble Bank is a well-known sandbank in Southampton Water and is the scene of an annual cricket match between two yachting clubs when the sands are exposed in low spring tides.