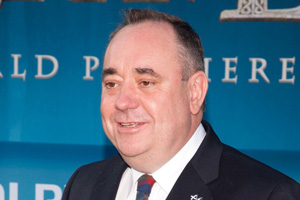 Salmond told the British Air Transport Association (BATA) annual dinner in London: “APD is a millstone around the neck of this industry and of the Scottish economy. The Scottish government intends to reduce APD.”

The former leader of the SNP, who will stand for a seat at Westminster in the general election in May, said: “The duty is punitive.”

The coalition government in Westminster published proposals last week to devolve APD to Scotland in the next Parliament.

Salmond insisted: “The Scottish Government is determined to reduce APD initially by half and, in consultation with the aviation industry, see what the reaction is.”

Referring to a PwC report on the economic benefits of abolishing APD, published in 2013, Salmond said: “If the Treasury had a convincing rebuttal of the PwC report they would have published it.”

He told the BATA audience: “If the government was serious about the issue, APD could be devolved immediately instead of waiting, allowing an early implementation of that 50% cut to see if the claims of this industry are correct.”

Despite the delay, Salmond said: “The advent of APD devolution is going to allow the logjam on APD to be broken.

“It is going to determine whether this industry is correct – whether it is possible to cut a tax and generate economic activity.”

He added: “I believe it will provide a demonstration of an economic effect, which I believe this industry will respond to.”

Asked about his priorities in standing for election to Westminster, Salmond said: “One of our key priorities is [air] connectivity and the reduction of APD.”