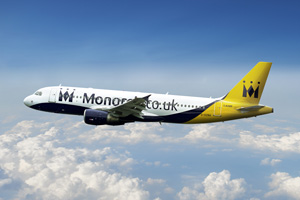 Monarch Group hit its targets on revenue and cost cutting in its first 100 days under new ownership and will turn a double-digit operating profit this year, according to chief executive Andrew Swaffield.

A Monarch return to profit would represent quite a turnaround after the company recorded a £44-million operating loss in the 12 months to October and put the costs of restructuring at £125 million.

Swaffield has cut Monarch  Airlines’ capacity for the summer by almost 20% and will take out £200 million in costs this year.

The carrier will end long-haul and charter flying after 47 years as a charter operator. New owner Greybull Capital took over from long-time Monarch owners the Mantegazza family on October 24.

Swaffield said yesterday: “We’ve taken a serious amount of costs out permanently. We want to return to sustained profitability.”

He said the decline in the price of oil had helped, but the group would operate profitability whatever happened to the price.

Swaffield said: “When we wrote the business plan we assumed a fuel price of $90 a barrel. It has come down by 40% since and that is a bonus for us. But we are returning the business to profitability regardless of the fuel price.”

He added: “We are on target for winter revenue and summer bookings. “We’re operating the same size network this winter [as last] and are slightly up year on year on revenue.

“We’ve taken about 20% capacity out for the summer and so far we’re performing above target – a fraction of a percent above.”

Of new owner Greybull, he said: “We are delighted with the relationship. They are very supportive. We feel we have chosen a great partner.”

Chief financial officer Barry Nightingale, who joined at the start of January, added: “We are only three months in and we’ll update again in June when profit projections will be much clearer.

“But the £200 million in cost savings are baked into the plan. They are all being delivered or are deliverable this year.”

Swaffield said: “This has been a very substantial and substantive turnaround. It has been cost driven. It does not depend on growth or revenue.”

He insisted: “We are confident of a double digit [operating] profit this year.“