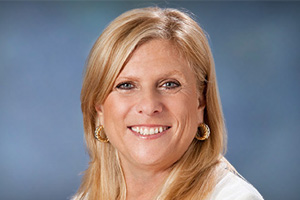 Celebrity Cruises boss Lisa Lutoff-Perlo (pictured) says the line needs to ensure it is front of mind for consumers and maintain momentum and energy in the next three years as it awaits the introduction of its new Edge class of ship.

Celebrity Cruises will launch the Edge class in 2018, but between now and then numerous rival cruise lines are also launching new ships. In light of that, Lutoff-Perlo said it was important to keep building excitement about the Celebrity brand.

Speaking at an event for the trade and media in London last night, the line’s president and chief executive said the new ships would “elevate the brand with a modern luxury ethos”. While admitting it would be hard for the premium operator to up its game, she promised the ships would be “edgy”.

The first of Celebrity’s two ‘Edge’ ships is due for delivery in autumn 2018, with the second following in early 2020.

Lutoff-Perlo said Celebrity was in great shape as a business, adding that while that made it difficult for her to take it to new heights, this was the “opportunity and challenge” before her.

Speaking in her first interview with the UK trade back in December after her appointment, Lutoff-Perlo said the new vessels would allow Celebrity to “nip at the heels of the upper end”, and the more they did that, the better.

At the time she also spoke about the company’s strong ties with the UK trade and added: “There is a very special place in my heart for the UK.

“We’ve seen a groundswell of support for Celebrity from the trade and consumers and we’ve seen real success in the last year from being very single-minded and razor-sharp in our focus on affluent customers.”