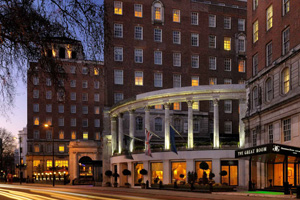 The underlying operating lease with Marriott and day-to-day operations of the hotel on Park Lane are not affected.

The Grosvenor House is on the market via property agents JLL, with Deloitte appointed as administrators, the Financial Times reported.

Phil Bowers, joint administrator at Deloitte, said: “Grosvenor House Hotel is an exceptional asset, at a London address recognised around the globe.”

“The last hotel transaction on Park Lane took place two years ago and the market has strengthened since then,” he said.

Roy has been in jail in India since last March on contempt of court charges. He was granted day release from his cell last year to negotiate the sale of some of his holdings including the Grosvenor House, according to the FT.

His purchase of the hotel in 2010 was the largest London hotel deal on record, according to estate agents.

The Grosvenor House is one of the best-known awards and events venues in London.