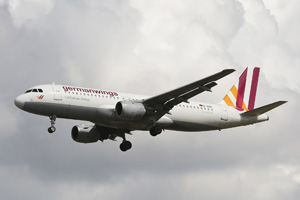 An Airbus A320 carrying 144 passengers and six crew has crashed in the south of France.

The Lufthansa-owned Germanwings aircraft was en route from Barcelona to Dusseldorf.

News agencies report that two helicopters from France’s aviation police (DGAC) located the wreckage of the plane near Prads-Haute-Bléone, between Digne-les-Bains and Barcelonnette.

The aircraft reportedly disappeared off radar screens at 11.00 French time.

The French transport minister, Thierry Mariani, confirmed a distress call was made by the aircraft at 10.47 local time while the plane was “at 5,000 feet and in an abnormal situation”, with the crash occurring “shortly afterwards”.

French president François Hollande said: “The conditions of the accident, which have not yet been clarified, lead us to think there are no survivors … The accident happened in a zone that is particularly hard to access.”

In a statement issued at 2pm GMT, Germanwings issued a statement which said: “We must confirm to our deepest regret that Germanwings flight 4U 9525 from Barcelona to Dusseldorf has suffered an accident over the French Alps.

“The flight was being operated with an Airbus A320 aircraft, and was carrying 144 passengers and six crew members.

“Lufthansa and Germanwings have established a telephone hotline. The toll-free 0800 11 33 55 77 number is available to all the families of the passengers involved for care and assistance.

“Everyone at Germanwings and Lufthansa is deeply shocked and saddened by these events. Our thoughts and prayers are with the families and friends of the passengers and crew members.”