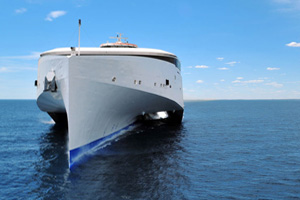 Condor Ferries has confirmed that its new £50 million fast ferry was damaged during strong winds while trying to dock in Guernsey.

The 880-passenger Condor Liberation had only just entered service between Poole and the Channel Islands when the incident occurred on Saturday afternoon.

“Condor Liberation has suffered minor damage above the waterline, as a result of landing heavily against fenders as she berthed in St Peter Port in high winds,” the company said.

The vessel returned to Poole for repairs which are expected to take “only a couple of days,” Condor executive director of operations Fran Collins said.

“On arrival in St Peter Port, Condor Liberation attempted to dock on Berth 2 but high winds prevented this, so the decision was taken to change to Berth 1,” she said.

“Whilst manoeuvring onto Berth 1 in strong winds, the ferry landed heavily against a fender, causing minor damage to the protective belting.

“In the meantime, Commodore Clipper will provide passenger services between the UK and the Channel Islands. All affected passengers are being advised of the changes to their sailings.”

Sunday’s sailings had already been cancelled due to forecast bad weather. Condor Liberation completed its maiden voyage to Jersey on Friday.