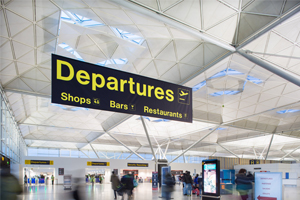 Stansted is the third London-area airport to report a surge in passengers in March, helped by a boost in domestic flights.

This represented the 10th consecutive month of double-digit growth with almost one million passengers using the airport in the first quarter of 2015, a rise of 16.3%.

Airport managing director, Andrew Harrison, said: “The total number of passengers using the airport in the last 12 months grew by over 16% to leave us tantalisingly close to the 21 million passengers a year milestone.

“In March, passenger numbers were up by more than 24% over the same month last year.

“This excellent performance has seen Stansted experience double-digit growth for ten consecutive months, a fantastic achievement and testament to the strength of our airline partners who have added more routes, increased frequencies to key destinations and seen more people on each flight.

“Growth in domestic traffic has been particularly strong with passenger numbers up 40% over last year due to new Scottish flights from Ryanair plus the arrival of Flybe to serve Newcastle and Isle of Man with a Newquay service joining later this year.

“To help keep pace with this rapid growth in passenger numbers – Stansted is the fastest growing major airport in the UK – we continue with our investment programme to enhance and improve airport services and facilities, and we are also recruiting significant numbers of additional key staff to ensure we can get our passengers as quickly, efficiently and safely through the airport as possible.”