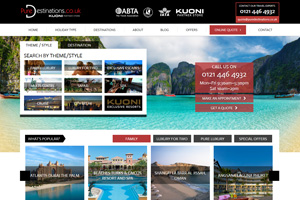 Director Lakh Hayer said the Edgbaston-based agency, one of three new partner stores announced by Kuoni at the end of last year, has already taken £200,000 in new Kuoni holiday sales since the start of this year.

New partner stores are tasked with selling £1 million of Kuoni holidays in the first three years of the partnership.

“We had an amazing January and February before we were even listed on the Kuoni website in March,” said Hayer, who is now planning to produce the agency’s first brochure and run a consumer holiday show.

Hayer is convinced the partnership and extra marketing to push the rebranded and refitted store as a result of the tie-up with Kuoni have boosted holiday sales across the board.

The agency launched its first radio advertising campaign from November to March to promote the new Kuoni partnership, signing up to a deal with Smooth FM Radio to capture more of the 40-plus age group of customers.

“It was quite scary as we’ve never done radio before but I’ve always wanted to try it and want to target that age group of people with more disposal income,” admitted Hayer.

As well as a refitted store, the agency has rebranded its website and held a launch party for around 100 clients.

Its sister call centre and online agency brand Honeymoon Dreams moved out of the agency in November to new premises nearby after outgrowing the office space. It now has 11 staff in total.

The company also has four homeworkers nationwide who work across both brands.