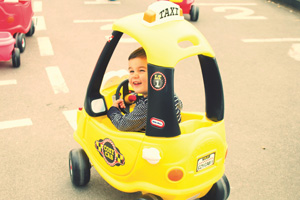 The new Tree Fu Tom live show features the TV characters Tom and Twigs on an adventure through the magical world of Treetopolis.

After finding an old map, Tom sets off on a mysterious journey that includes audience participation and activities.

‘It’s Time with Katy’ involves a large grandfather clock with three illuminated zones each representing a game, song or story.

In the holiday park’s Bognor resort, the new shows will also be joined by a 20-minute Play-Doh Live show, which will be exclusive to Butlins in the UK.

Butlins has teamed up with arts and crafts brand Play-Doh to create the show using flourescent puppets on stage aimed at children aged five and under, from this month.

Play-Doh activity sessions will be included on Just For Tots breaks.

Other acts on Just for Tots breaks include Mister Maker, kids’ characters Angelina Ballerina, Fireman Sam, and Butlins’ own Billy and Bonnie Bear.

Four night breaks start from £69 for arrivals on April 20, based on two adults and two children, sharing a Silver self-catering apartment at Bognor Regis.