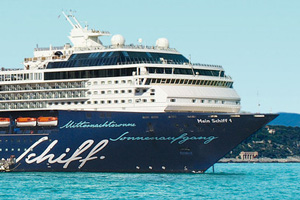 The Thomson Cruises fleet is to be expanded with the transfer of two ships from German sister line Tui Cruises.

Mein Schiff 1 (pictured) and Mein Schiff 2, both former Celebrity Cruises vessels, will bring the Thomson Cruises fleet up to seven ships if the current fleet is maintained.

The former Celebrity Galaxy and Celebrity Mercury each have a capacity for almost 2,000 passengers.

No timescale has been put on the move but Tui Cruises has agreed to order two new ships for delivery in 2018 and 2019.

“In the framework of exercising our purchase option it was agreed that Mein Schiff 1 and Mein Schiff 2 will be moved to Thomson Cruises in the next few years in order to continue the modernisation of the UK cruise operations,” Tui Group revealed as part of last week’s half-year results announcement.

The disclosure followed the purchase of 1,830-passenger Splendour of the Seas from Royal Caribbean Cruises, which is to join Thomson Cruises in summer 2016 as a replacement for Island Escape, currently operating under the Island Cruises sister brand.

Splendour of the Seas is to be renamed Thomson Discovery and will be the largest in the fleet.