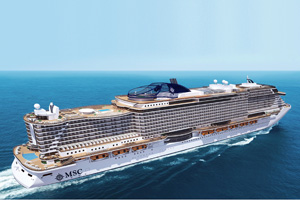 MSC Cruises is unlikely to return to offering a full season of ex-UK sailings until 2018, a year later than the line previously predicted.

Speaking at the steel cutting of new ship MSC Seaside (pictured), Gianni Onorato, chief executive of the line, said the line would be delayed returning to the UK by a year.

Initially there had been hopes that the brand would make a return in 2017, having pulled out this year.

Next year the line is offering a small number of sailings from Southampton, but Onorato said “internal commitments” had meant the operator would not have a ship sailing a full season from the UK until 2018.

He said: “we are going to look more deeply at the North American and UK markets, and then after that we will look at Asia.

“In the UK we want to be the reference cruise line for the Mediterranean, and we’re investing in that. As soon as we have growth in the fleet we will look to have a competitive ship in the UK market.

“I think we will have a one-year delay in coming back to the UK because of other developments internally.”

He said over time he would like MSC to rival domestic cruise lines such as P&O Cruises.

Giles Hawke, executive director for the line who is responsible for the UK market, said it was important for the line to grow and build revenues in the UK if it wants to secure a ship ex-UK.

Onorato also made some announcements about new features onboard MSC Seaside, which will sail year-round from Miami when it launches in 2017.

The ships will offer “super family plus” cabin for groups of up to 10 people, as the line looks to capitalise on the growth of multi generational and group cruises.

It will be “extremely kids-friendly” according to Onorato and will also have a kids-only restaurant. Onorato said MSC was a family company which always had families at heart.

He announced that there would be cluster cabins for groups of up to 10 people, with the super family plus option combining two balcony staterooms and an inside cabin.