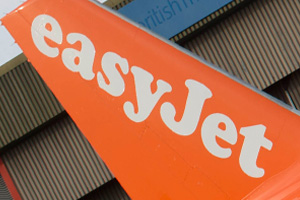 EasyJet today followed budget airline rival Ryanair is reporting strong summer trading with a hike in forecast annual profits to as much as £700 million.

The carrier flew a record 7.06 million passengers in August at a load factor of 94.4%.

The airline reported a stronger than expected revenue performance in August and September, boosting by a 6%  hike in capacity and demand for “beach routes” from the UK.

“This strong revenue performance has more than offset the significant cost headwinds that the business has faced this year, with greater-than-expected disruption across the network particularly in April, the impact of the two fires at Rome Fiumicino airport, the one-off £8 million settlement with Eurocontrol and costs associated with higher load factors.” easyJet said in a trading update this morning.

“Consequently full-year profit before tax guidance is now expected to be in a range of £675 million to £700 million for the year to 30 September 2015, from £620 million to £660 million as previously guided.”

“This platform meant that easyJet was best placed to maximise the strong late summer demand from UK passengers to get away to beach and city destinations across Europe and will enable the airline to set new records for full-year revenue and profit.”