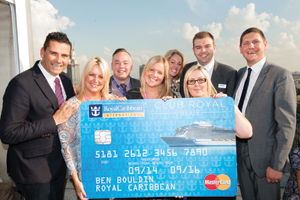 Royal Caribbean International has pledged to hand out more than £1.5 million in rewards to agents next year on top of commission payments.

The investment in Club Royal came as the line revealed new tiers to incentivise top-performing agents further, as well as plans to reward agencies’ regional sales managers for the first time.

Royal Caribbean is in talks with Thomas Cook and Tui to roll out the rewards scheme to regional sales managers. Although the rewards tier is still being developed, the line said it was likely to be target driven.

Club Royal is used by almost 6,500 frontline agents, who earn a minimum of £5 per booking on a blue branded Mastercard. To encourage top-performing agents, any Club member who earns more than £1,000 in rewards will qualify for the new Gold Card tier, which will come with extra benefits, such as a £25 birthday bonus.

Sales director Ben Bouldin said: “Agents are massively important to us and we put our money where our mouth is and reward them in the right way.

“Those who have reached the Gold Card level have made a significant number of bookings to get there. This keeps them engaged by rewarding them further.

“We are speaking to Thomas Cook and Tui about the rewards scheme for regional sales managers and that will be a quarterly incentive. We want to recognise the role they play in the sales process.”

Royal Caribbean is looking at the potential to extend the scheme to other agency chains.

Bouldin said the feedback for the scheme had been “overwhelmingly positive”.

He added: “The whole point about Club Royal is that its open to everyone and it’s something all agents can be part of. We’ve had great feedback over the past year and we’ve had some ‘wow’ moments such as giving away an £10,000 diamond at The Globes to a Club Royal member and taking a group on a VIP trip to Paris.”

Bouldin said that by the end of this year he expects more than 8,000 agents to be registered on the rewards programme.

The line is also offering agents the chance to secure a place on Harmony of the Seas’ inaugural sailing. Agents will move up a ‘virtual queue’ when making bookings and interacting with Royal on social media. The top 500 in the queue will win a place on the fam for themselves and a guest.