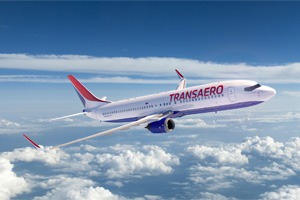 The future of Russia’s second largest airline Transaero is shrouded in uncertainty after ticket sales were suspended.

A takeover by state-controlled Aeroflot reportedly collapsed last week, leaving the airline on the brink of bankruptcy, according to local reports.

Operations are due to cease in mid-December.

The airline is believed to have as many as 650,000 forward bookings, with other airlines in Russia hoping to honour tickets.

He blamed “ineffective management” for the airline’s troubles.

The crisis at Transaero could leave just two airlines – British Airways and Aeroflot – operating the London to Moscow route after easyJet announced its service from Gatwick would be suspended from March.

The Foreign and Commonwealth Office (FCO) confirmed that the sale of Transaero tickets was prohibited by the country’s transport minister last Friday.

“Some Transaero flights will continue to operate, but many are being cancelled,” the FCO said.

“If you are booked on a Transaero flight contact the airline or your travel agent.”

Little information was available, however the Transaero website said that ticket sales had been suspended and it would be looking to work with partners “to ensure the carriage of the passengers holding the tickets of the airline”.

The airline said: “The transportation of passengers-holders of the airline’s tickets on domestic and international routes will be provided until December 15.

“Passengers-holders of tickets for flights after December 15 will be able to get refund of the full ticket price.”