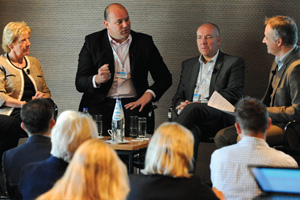 Last week’s Travel Weekly Business Breakfast at The Travel Convention marked the launch of Take Off In Travel 2016 and featured a discussion about careers and talent in the sector. Phil Davies reports

The provision of apprenticeships in travel remains uncertain as the government consults on its plans to develop employer-led ‘trailblazer’ groups.

The key issue is how much of a levy companies will pay to help fund the scheme, which aims to create three million new apprenticeships in England by 2020.

The summer Budget set out plans to introduce a levy on large employers to create a fund supporting apprenticeships. Further details of the levy are due to be set out in the 2015 Spending Review.

Discussions involve the use of digital credits to offset the cost to employers, but Midcounties Co-op’s Alistair Rowland described the apprenticeship policy as “potentially odd legislation” due to the differing implications for large and small employers.

“Apprentices need people to help and support them, which ?can make it less attractive for small employers due to the upfront costs involved,” he said.

Monarch boss Andrew Swaffield described the government consulation over apprentices as being at a “very vague stage” but said: “I am pretty sure we will end up with a levy”.

Dnata Travel’s Andy Freeth highlighted that £40 billion a year is spent on skills training in the UK, with the private sector picking up much of the bill.

While supportive of taking on apprentices, he pointed out that this can be time-consuming for management.

“The other fear is that they [apprentices] end up doing the jobs others don’t want to do – and then they leave,” he said.

Freeth also suggested that students were unaware of the diverse range of roles available within the travel and tourism sector – a point picked up by others members of the panel.

Swaffield outlined the varied needs of an aviation business, including roles such as finance, revenue management, engineering, IT and oil trading.

But he warned that the UK faces a serious skills shortage which could see the country falling back into recession in eight years ‘time unless it is addressed urgently.

He warned of a “demographic time bomb”, saying a lack of skilled workers from 2023 was a “massive political issue that noone is ?talking about”.

School-leavers, he added, must be encouraged to regard apprenticeships as a credible alternative to going to university – and the travel sector should work more closely with education providers to highlight the opportunities available.

“We have got to get people to understand that there are some really interesting careers in travel,” said Swaffield. “We need the best accountants, risk managers, experts in oil hedging. We want them to consider travel, not just banking and technology; it’s a glamorous industry.”

He added: “We should leave education to education but business should co-operate with education by going into schools to talk about careers.

“Business should not moan about education as we do. There are lots of young people out there who do not know what to do [when they leave school].

“You need to be shaped by a good employer to give the right disciplines. It’s not realistic to expect kids to pop out of school as the finished article.”

Rzymowska said: “This is an attractive industry to work in – we’re not selling widgets. We should be able to get the talent because of that but we have to be doing more as an industry.”

Abta was suggested as a potential body to represent the travel industry in boosting opportunities in travel, but Freeth questioned whether the association can represent the needs of such a diverse sector as travel and tourism.

He also called for more effort to be made to promote the benefits of careers in travel through “early stages” career advice in schools.

Rowland, an Abta board member, backed the association as being the lead body for the industry, while admitting to a skills gap within the sector.

“Travel retailing is very hard to recruit into,” he said. “We have to build our own talent.

“Travel and tourism should be aspirational for school-leavers rather than something that people just fall into because internal talent is disappearing.

“We need a bigger share of the talent moving through.”

All managers at Midcounties Co-operative are charged with visiting their local schools to talk about the benefits of working within travel and tourism.

“That needs to work on a larger scale,” Rowland urged.

Rzymowska agreed that the sector needed to do more to encourage young people to consider travel as a career as well as supporting older staff with more-flexible working arrangements around childcare and caring for ageing parents.

“We should be able to make work more flexible for those with families, older parents and childcare,” she said.

But for newcomers, she said: “People underestimate the dynamics and pace of the industry, so they need to get up to speed very quickly.”

With a high proportion of female staff in travel, Swaffield said there was a need to encourage more women back to work after maternity leave.