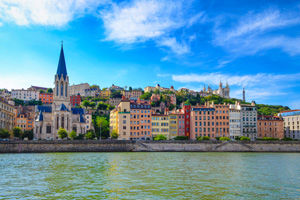 A new service to the South of France helped push up Eurostar’s summer carryings despite migrant incursions in the Channel Tunnel.

A record of more than one million passengers used the high speed passenger rail service between the UK and the Continent in July alone – the highest number travelling in a single month since services began in 1994.

Overall carryings for the third quarter of the year rose by 2% or 70,000 to 2.87 million over the same period last year.

The increase in passengers in part reflected the popularity of the direct year-round service to Lyon (pictured), Avignon and Marseille, which started on May 1, with more than 115,000 tickets sold to date.

High profile events in September, including the Rugby World Cup and the staging of Fashion Week in both London and Paris, also helped push up carryings.

A rise in the number of business travellers reported in the first half of the year continued with the number increasing by 7% over the last three months compared with the same period last year.

But the strength of sterling and the fluctuations in the exchange rate continued to have an impact on sales revenues in line with the first half of the year.

At constant exchange rates, third quarter sales revenues were flat year-on-year whereas at actual revenues reduced by 5% to £200 million from £211 million a year earlier.

This came as the average sterling verses euro exchange rate increased by 10.6% compared with the same period last year, according to the company.

Eurostar’s new fleet of e320 trains is in the final stage of testing with the trains on track to start entering service by the end of the year, providing 20% more seats, wi-fi connectivity and onboard entertainment.

The first newly re-modelled and redesigned trains from the current fleet entered into service in early September.

Eurostar chief executive, Nicolas Petrovic, said: “After a busy summer and a record breaking month of July with over a million passengers, we are gearing for the arrival of our new state of the art fleet of trains.

“As we approach our 21st birthday, our business is really coming of age.

“With new trains, more seats, transformed interiors and a range of onboard entertainment, our passengers can look forward to an exciting future.”