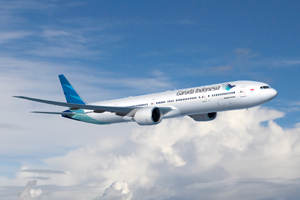 Indonesian carrier Garuda is reportedly pulling its Jakarta service from Gatwick having secured slots at Heathrow.

A service to the Indonesian capital from the West Sussex airport via Amsterdam is due to be replaced by a link from Heathrow initially via Singapore.

“Garuda launched Gatwick in September 2014 as a tag to Amsterdam and now plans to drop Gatwick in March 2016 while launching Heathrow to Jakarta nom-stops,” CAPA, the Centre for Aviation, reported.

The aviation market intelligence service added: “Initially the Heathrow flight is slated to stop in Singapore on the outbound leg but Garuda expects to eventually operate non-stops to London once runway issues at Jakarta are resolved.”

The airline has shelved plans to start services to other destinations in Europe such as Frankfurt and Paris while Amsterdam will be served separately instead of being linked to London.

Garuda cut its Gatwick-Jakarta schedule from five flights to three a week in July.