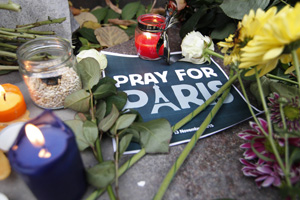 The former boss of World Travel Market, Fiona Jeffery OBE, gives a personal take on the tragic events in Paris which shocked the world and raised more questions over security for the travel industry

There are times when events take over; the last time I experienced this was after 9/11 and ten weeks before World Travel Market 2001, when the expectation was that we would cancel the show. Of course we did not.

It was even more important at that time that we showed leadership and that the industry came together in a statement of united support for the freedoms and values we often take for granted, and which cause fear and panic when so cruelly threatened.

As I landed in Heathrow at 5am on the Saturday morning from Kenya, it was only then the terrible events of the previous Friday night hit my radar. I was due in Paris the following day for a two-day meeting of the UN World Committee on Tourism Ethics – the venue, ironically, the Ministry of Foreign Affairs.

Committee members from as far as Japan, Indonesia, Sri Lanka, Chile as well as Tunisia, Turkey and France itself were due within 24 hours, and by 10am that morning we knew the meeting was still on, as planned and scheduled. It was the right thing to do and the only thing to do.

There is no doubt the French government appreciated this statement of support from the international tourism industry and recognised its significance, just as it appreciated the statement made by both English and French football teams on Tuesday night.

The front page of the French paper L’Equipe, the following morning, showed an image of the players circle in red, white and blue with the words above it “THANK YOU”. We joined all the staff at the Ministry in a national minute of silence at noon on Monday.

So how has Paris been in the aftermath? I have to say our Gallic ally was stoical. Wounded, shocked and traumatised, yes, but calm, resolute and without panic. By Monday shops and restaurants were reopening and children were going back to school.

Memorials had started to be set up including at Place de la Republique, where I visited Tuesday night, to pay my respects. I have to say what I witnessed didn’t reflect the dramatic tone played out on the CNN coverage I watched from my hotel room.

The restaurants and shops had security guards at the entrances to search your bags, but everyone was very friendly and polite. There was no aggression, with security services more concerned to put you at your ease than instil fear. Dare I say it, the Parisians seemed friendlier than ever before.

So what must we all take away from these tragic events that impact our lives and scar the victims and their families for a lifetime?

That what we have is so precious we need to value and nurture it in the values and ethical principles we pass onto our children. That our industry demonstrates better than many the tolerance required to add value to a collective civil society.

And that our role as tourism professionals is to support those destinations and communities, wherever they may be, that have been struck by acts of terror, and help them rebuild their communities because at the same time we are investing in our collective security and our desire to live and travel with freedom and without fear.

Article 1 of the Global Code of Ethics for Tourism states: “ The understanding and promotion of the ethical values common to humanity, with an attitude of tolerance and respect for the diversity of religious, philosophical and moral beliefs, are both the foundation and consequence of responsible tourism; stakeholders in tourism development and tourists themselves should observe the social and cultural traditions and practises of all peoples, including those of minorities and indigenous peoples and to recognise their worth.”